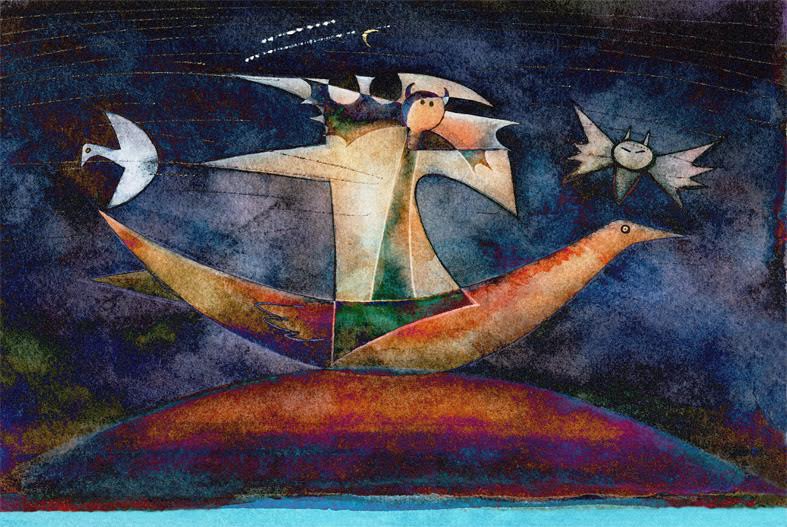 Charles Newington paints with refreshing unselfconsciousness and fertility of imagination – all the more remarkable for one who trained formally at Byam Shaw, Camberwell and Central School of Art.

The exuberant paintings currently on display at Gallery 8 Duke Street express his own symbolic language, reminiscent of Miro and Charles’s hero Matta, but especially of Wilfredo Lam, the Cuban artist. This is not a coincidence, because this cycle of work was begun on a visit in 2013 to Cuba where Charles and his artist friend Kevin Jackson set up a makeshift studio in a derelict disco bar shack on the beach.  “I fell under the spell of Wilfredo Lam,” says Newington, “and was magnetically pulled into his world of jungle surrealism with its undercurrent of the visionary occult.”

Newington is well known in Kent for his giant white horse etched in chalk into the living landscape above the Channel Tunnel entrance in his hometown, Folkestone. Horses and other creatures spill out with riotous energy and pure rampant primitive imagination from these canvases, stirring echoes of Aztec and African art in the mind.  “Making each image has been a journey into another world,” he writes, “leaving behind any logic or meaning that can be explained.” As if he is channeling pictograms from an alien culture from outer space, or from deep within our ancient shared unconsciousness, these other worlds, other spaces have to be experienced.

Finch & Co are showing concurrently in the same space a collection of fascinating and beautiful antiquities and artefacts: “Distant Times Distant Lands”.

Other World, Gallery 8 Duke Street, St James’s from 7 to 11 June