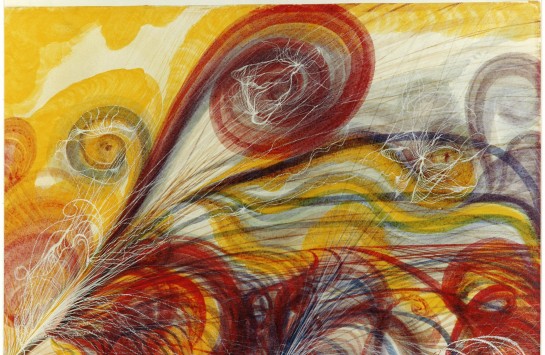 The Eye of the Lord

Everyone is talking about the recent discovery of the art of Georgiana Houghton (1814-1884). She is the Victorian lady whose modest works on paper dating from the 1860s have forced the experts to rewrite art history. Her work was totally unknown till the current exhibition at the Courtauld. In fact, of her estimated 300 works, only 50 paintings still remain (preserved in the Victorian Spiritualists’ Union archive in Melbourne, Australia); the others are sadly believed to have been lost.

Amongst the extraordinary features of her work, the first is they are almost totally abstract, which has meant backdating by 50 years the invention of abstract art: hitherto Kandinski was believed to have painted the first abstract work circa 1910. Houghton did make one brave effort of self-publicity: she rented a gallery in 1871 to share these works with the public, but her fellow Victorians could not appreciate their revolutionary artistic and aesthetic quality. Like so many unfortunate artists, she was ahead of her times. She was forgotten for 150 years.

Another astonishing feature is that Houghton did not consider these paintings to be her own work, even though in her youth she had been educated as an artist. She subsequently trained as a spiritualist medium and, according to her testimony, her hand was guided through these paintings by various spirit guides, including famous artists like Titian and Correggio.

However, most sensational of all are the paintings themselves. At first sight they are bewilderingly detailed, intense, authentic, beautiful, almost alien in their originality. You will never have seen anything quite like them. A multitude of layers of swirling coloured lines give an impression of depth and richness of tone. The colours, she says are symbolic of the Holy Trinity: yellow for God the Father, blue for the Son, red for the Holy Ghost. Her first spirit paintings are simple, often flower like. Fairly quickly they become intricate and lighter in tone, with names such as The Eye of God, The Sheltering Wing of the Most High, The Glory of the Lord. Over the elaborate webs of colour, faint in the background, with increasingly dense hues in the foreground, she sprinkles lacey traceries of white, like a snail’s trail through dew, or fairy markings. She said hers was “a new form of religious art”. Notes on the backs of the paintings attempt to interpret her symbolism.

When my eyes settled into harmony with her vision, it seemed that she was somehow visually interpreting cosmic forces normally invisible to human eyes. She also wrote that “every thought, word and deed is accompanied by the spiritual emanation of a slender thread of coloured light”. She was trying to paint the threads of karma! She was attempting to freight into the visible world the majesty, immensity, power and complexity of the invisible world, and so had to invent a new visual language, one that we are only just beginning to be able to appreciate, apparently. The fact that these paintings have surfaced at this point in time must be significant. I hope we can at last decipher the profound script behind these very beautiful and moving paintings and give this amazing lady the position in art history she so richly deserves.