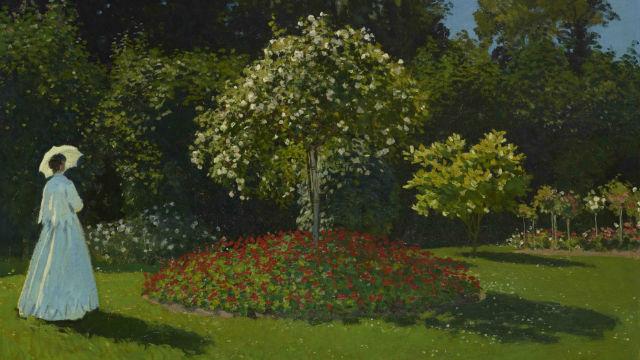 What a treat to be able to wander through beautiful lush verdant flower gardens instead of strolling amongst the bare trees in nearby Green Park under the cold drizzle of a January afternoon. The theme of the show is that many painters also cultivated, and of course then painted, their gardens. And the painted gardens by Cezanne, Renoir, Matisse, (and of course Monet’s paintings of his now famous garden at Giverny) with their brilliant colours radiate warmth. There are also some less well known artists here, Joaquin Sorolla from Andalucia, Childe Hassam from Boston, Max Liebermann from Berlin, which adds to the variety.

However, what was awe-inspiring, even shocking, about the piece de resistance of the show, the three panels of Water Lillies (Agapanthus) painted by Monet between 1915 and 1926 ???, reunited from 3 separate American museums,  is the leap into a new kind of art that Monet makes. “The subject is secondary, ” he said, “What I want to reproduce is that which is between the subject and me”. Standing in front of this vast shimmering waterscape, one is bathed in luminosity, which is more than colour, it is like a wave of life affirming intangible energy. Monet is the star of this show; he found his holy grail, he followed his individual path to its true source. What he achieved is beyond what words can express, but one recognises greatness as one stands in front of its humble majesty. He truly found something beyond mere subject, and as such raised his work above merely painting gardens.

(Published in the April issue of Galleries magazine)

Painting the Modern Garden at the Royal Academy until April 20, 2016