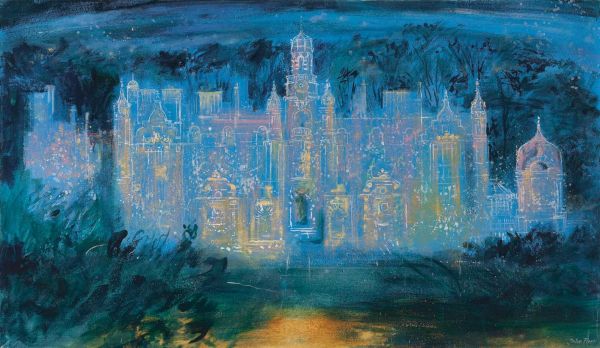 Spring in the fair

Waiting for a friend in the dazzling Spring sunshine on Duke of York Square was the perfect preparation for the diamonds, silverware, clocks and polished antique furniture sparkling amongst the wares on display at the annual BADA fair. However once inside, I was especially drawn to the paintings and sculptures shown by Beaux Arts (London), Messum’s Fine Art and Alan Wheatley, who had been invited to exhibit to attract a younger clientele. John Piper’s large dreamy oil painting, “Harlaxton Manor”(illustrated), dominated Beaux Arts’ stand, which also featured classical sculptures by Elizabeth Frink, including a wild bronze of a cat so alive it almost leapt off its stand! Messum’s displayed some Fergussons, a pink Rose Hilton, and a couple of distinctive three dimensional works on paper by David Tress. Alan Wheatley’s tiny figure by Henry Moore was well protected inside a glass case, alongside works by Alan Davie, Keith Vaughan and Kenneth Armitage. The sunlight was even more vibrant as we emerged from the journey we’d made through the nourishing dreams of such different artists.