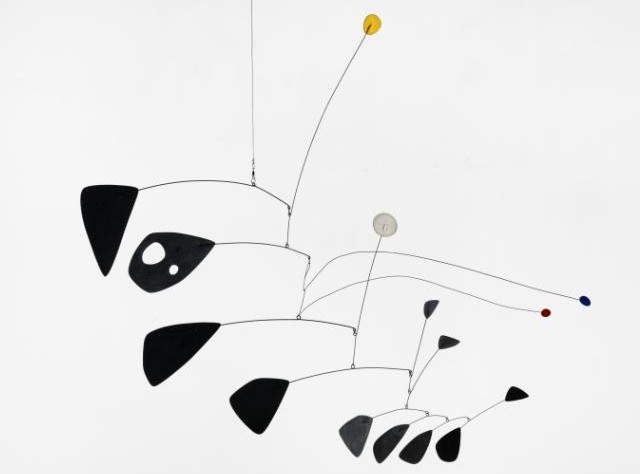 Alexander Calder’s early figurative portraits and sculptures of acrobats made from wire outlines are economical of line and witty, reminiscent of the drawings of Matisse and Cocteau. But his visit to Mondrian’s studio in 1930 was his watershed moment, changing his art completely. He later said it was “the shock that converted me… like the baby being slapped to make its lungs start working.” Henceforth his experiments with mechanical sculptures and what Duchamp described as his “mobiles” were exclusively abstract, as he sought inspiration from sources as diverse as the movement of planets in outer space and the wind through trees. Gravity-defying sculptures of metal leaves dangling from intricately connected wires hang from the ceiling or rise from the floor, gracefully balanced to form shapes such as Snow Flurry, Vertical Foliage or Constellations. He infuses movement, randomness and sound into sculpture. But more fundamentally, Calder almost completely eliminates the mass that we associated with sculpture. His minimalism is even more radical than Brancusi’s.  His airy elegance of form almost verges on formlessness. One leaves the exhibition lighter in heart, with a Zen like feeling of the world having become more spacious and playful.